We have been informed by a resident of Pontrieux and helpful RCIYC member that the lock at Pontrieux will be shut for 3 months from 28 October 2018 for the replacement of the top gate.

He also mentioned that 30 new berths have been installed recently downstream of the existing pontoons and prior to the trot moorings.  The photograph attached shows them in the far distance. The new berths are for berth holders, not visitors. 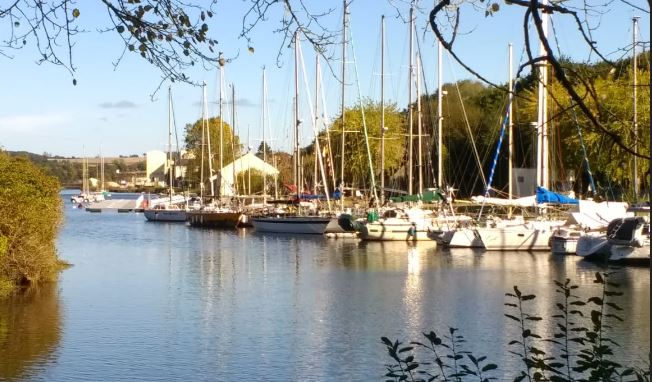 We visited in late September and had a great time. With a coefficient of 85, there was plenty of water at high tide. The lock keeper was very helpful and responded on VHF12.

Yann at Pontrieux marina is very good at responding to e-mails and is very helpful. He will let you know what space they have available.

The new pontoons work well and the visitor’s pontoon is just past the fingers. Much improved.

The facilities were the same as previously and were clean and tidy.

A great trip up a beautiful river – especially when the sun is shining.

You can reach the pontoons even if your draft is 1.8m.

Between the lock and the harbour, be just careful to keep the green buoys on your right and just after keep the new mooring line (it has been put in place last summer) on your left.

There is about 48m of alongside pontoon for visitors with 1.8 depth and below that soft mud so not problems. There was one spare finger and the harbourmaster guided us to it in his dinghy, depth about 1.9m but again below that soft mud. 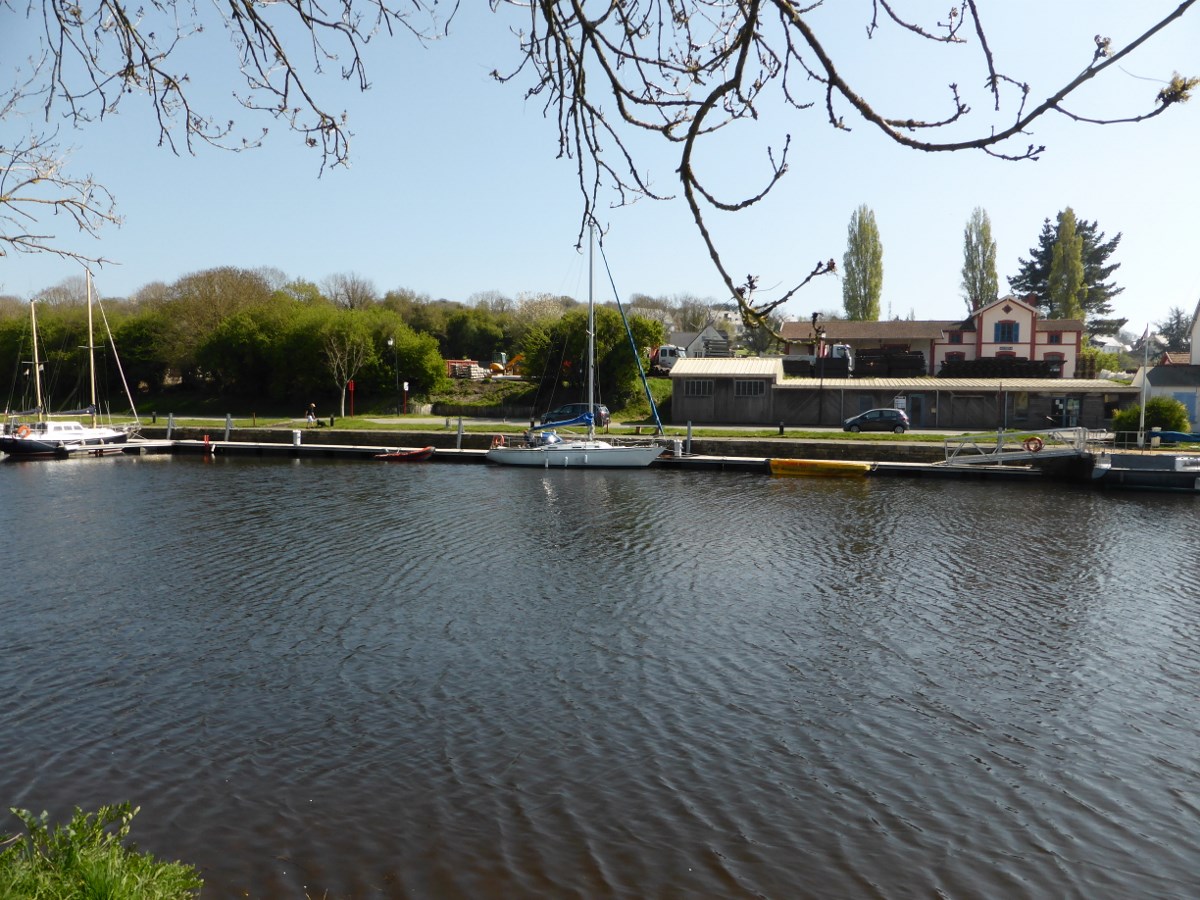 Approach after the lock is straight forward providing about half way along you pass between the red and green buoys and treat the moored boats as red buoys. Around 2.2m at its shallowest.

Harbour Master very helpful and has good English both spoken and written.

He says 24 hour access through the lock (tide permitting I assume) (if you are brave enough to try the river in the dark!!!). Water (standard threaded connectors) and showers are free as are electric and WiFi.

Today we went by bus to Pontrieux and returned by train, the Harbour has been greatly cleaned up, new footpaths, grass verge etc. I spoke with the Harbour master Yann who told me that some dredging had been done and that he has a depth of 2m as far as the visitors pontoon and that the lock keeper now hands out a plan of the port to show the best course to take and where the shallow bits are, he tells me it’s in English.  He did tell me that he had accommodated a 2.2 m draft yacht by prior arrangement.   The plan is to complete the dredging this coming winter.

We have also received the following very helpful feedback from JohnM

The plan was executed so there is a set of fingers have been added 2/3 years ago, some of which can be used by visitors. Also alongside pontoon further up. It is 2 years since we visited but when we did a lot of the older boats had vanished. I assume that happened when the pontoons and fingers went in. Prior to that we tied up just passed the harbourmaster’s office either on the wall or outside some other boats that were not very old. If we get there this June we will report further.

The lovely village of Pontrieux.

We loved Pontrieux from our first visit a few years ago and wanted to go back.

We made a special effort to go to Pontrieux in early May 2013. The weather was good and the tides were neap with a coeff of 55 (neap tide). However we did not have a problem getting to Pontrieux (draught of 1m). The Pontrieux harbourmaster had said it would be OK and he was right.

We left Lezardrieux 2.5 hours before HW and arrived at the lock just over an hour later. We were travelling at 5 knots and had the tide with us. We never saw less than 2m of water.

There are a few words of warning as there are lots of shallow areas.

When you get to the lock, there is a fair bit of room to wait. There are now thick while ropes you can hold on to in the lock. They are not everywhere but should be ample.

I used the latest update from Navionics  and the charts for the river were much better than last time. So if you are going to Pontrieux, a chart upgrade would not hurt. We could not find any paper charts of the route. Google maps also has aerial photography which was taken at low tide and you can use that to show your position relative to the shallow areas. 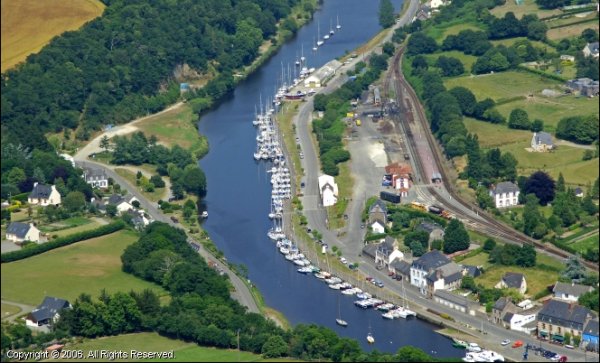 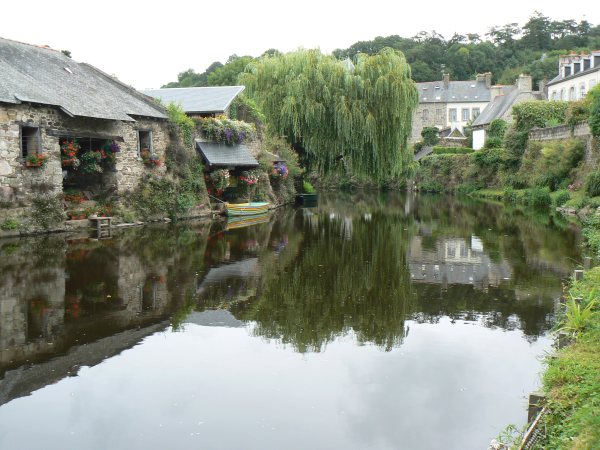 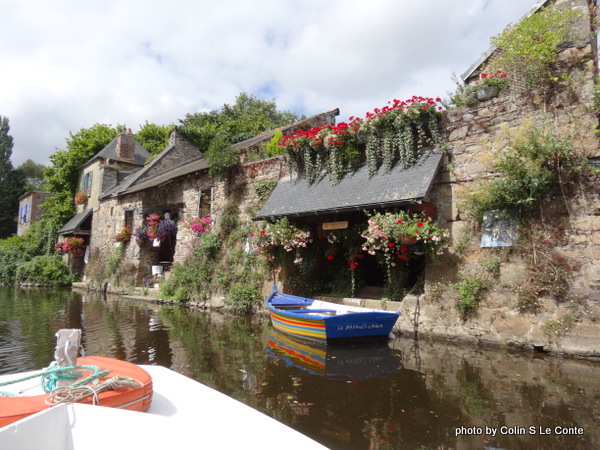 Excellent boat trip available of the Lavoirs in high season – only Euro 4 per person. 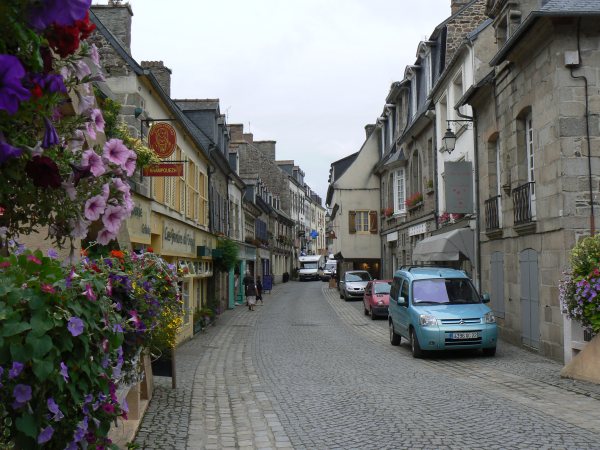 View across the bridge linking the 2 town “squares”. The east one is a triangle, and the west one is a trapezium. The east square contains the tourist information office, which is known locally as the Eiffel Tower – because Gustav Eiffel once slept there 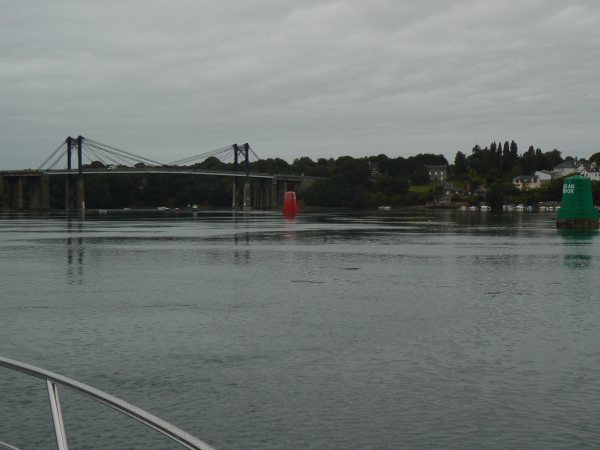 Leaving Lezardrieux, pass under the bridge. Note the chicane with the red port mark in line with the green starboard mark. Pass between these 2 marks 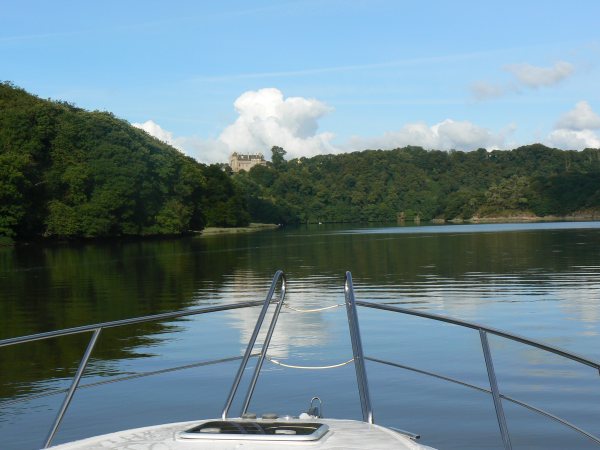 Views from the Trieux River 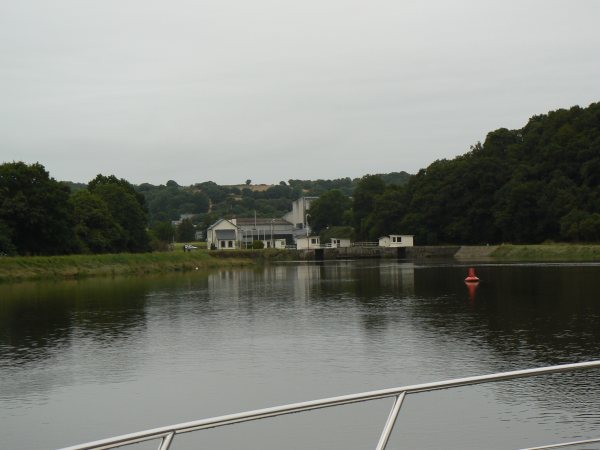 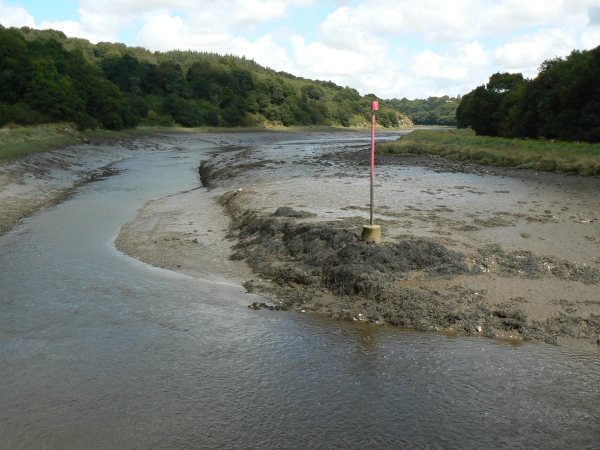 Looking back down the approach at low tide – that was why you have to keep the correct side of the red marks! 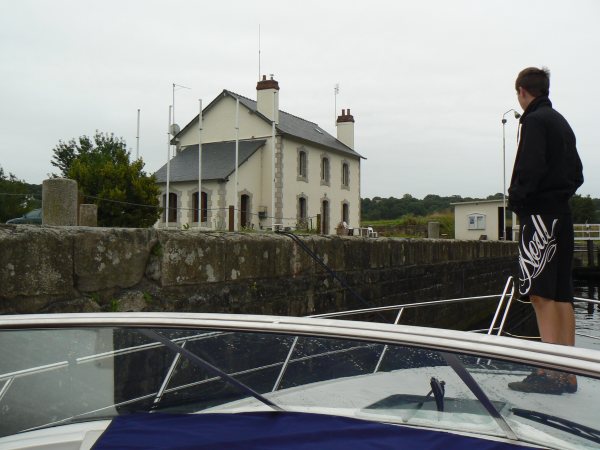 Inside the lock and the lock keepers office. The locks are hydraulic. They will take your rope and pass it back to you. Remember to slacken off when leaving Pontrieux and the water goes down! 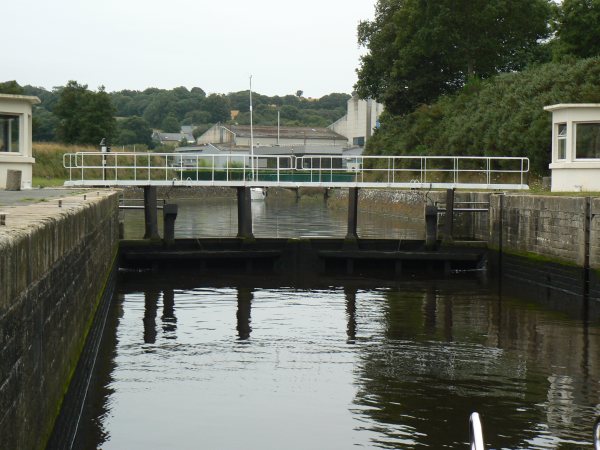 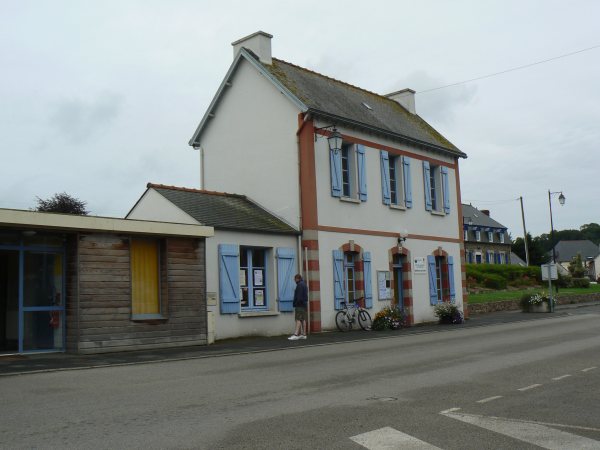 The Harbourmasters office. Facilities on the left. Only a couple of showers so sometimes a queue but very clean. Pay for showers the first day and the rest are included. Broadband is only available in the office but is free 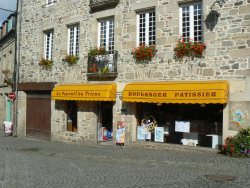 The Boulangerie is in the Town, about 15 mins walk from the moorings 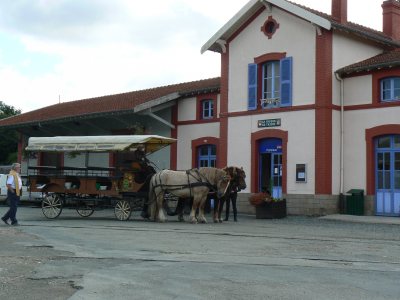 Things to do – see www.ville-pontrieux22.fr/Patri…

The boat tour of the Lavoirs is very good by day or night. Only Euro 4 and some pilots will do the tour in English. We really enjoyed it. Available from mid July to the end of August when the Laviors are decorated with flowers, mannequins and clothes. In September, 1 boat was still running until the end of the month, from 14:00hrs to late afternoon.

Chateau de la Roche-Jagu: Only open for parties reserving in advance (evenings). Can anchor off if keel can settle in mud! Look out for the 500 ton dredgers during the night! Can be a rude awakening. Anchor out of mid stream!!! 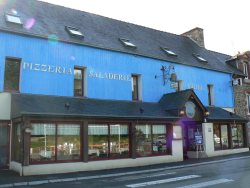 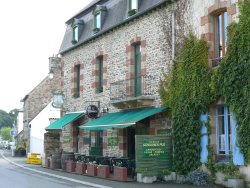 Schooner Bar – does good filled baguettes as well as other stuff. Has WiFi; believe there is a charge.

In Town (15 mins from moorings) 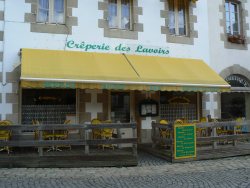 Le Pontrev – A good Restaurant in the town is Le Pontrev opposite the Post Office in the westermost square.

If the tide is not high tide – you may need to keep to the deepest parts of the river. Normally these are at the outside of the bends. I was told that dear Dave Fletcher from Guernsey (who was Assistant Harbour Master) used to put markers down the channel each spring to help boats.

The following google maps have been recorded as they show very well where the deep water is. These is a link at the bottom of the page for the full size images. I thought it best to record them in case they had new satellite photography which was at high tide and this important information was lost. 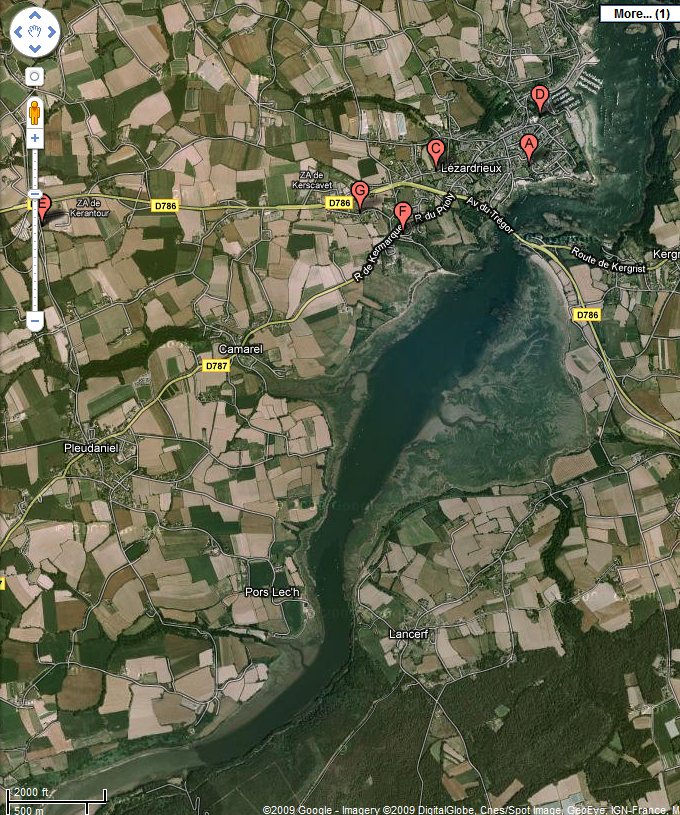 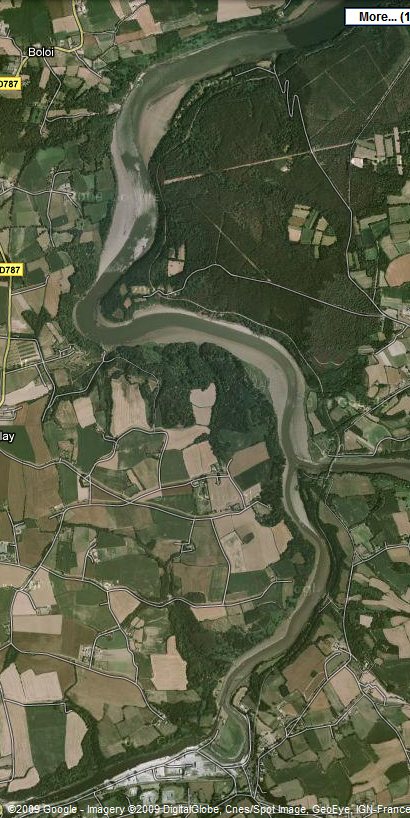